Ever since I have been watching science fiction movies and TV series the characters have always been talking to their computers. This was the case in Star Trek, Blakes Seven and 2001 A Space Odyssey and many others. In some of the science-fiction movies the computer would be talking back and sometimes knew much better than the characters in the movie about what should be done next. So you can understand that for some of us interacting with our computer with our voices is like living in the future. In this weeks Mac 20 Questions Podcast I give you an insight of what it is like to start the day by talking to Siri. 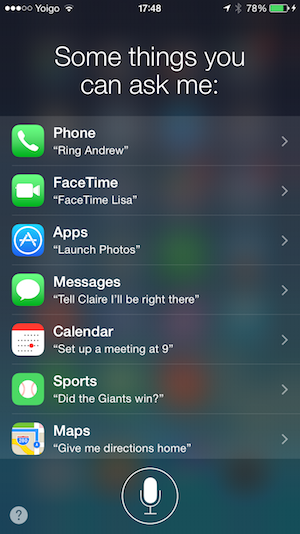 In the podcast you can hear that I am still quite groggy in the morning, almost to the point of being grumpy. The room is dark and I don’t want to open my eyes and let the light in. Yes, the brain has already started functioning in some small way. Actually, my brain only does functioning in small ways! So first of all I get my friend Siri to tell me what time it is as it is quite possible that I have been languishing in my pit too long. I should be up and out of my bed and taking part in the day. Siri even tells me “Good Morning” and is just too pleasant for words. She should really be saying “Get out of bed you lazy bastard, don’t you know what time it is?”

Quite often in the morning when you are just at this point of waking up you have ideas going through your head. Maybe you want to remind yourself of something that should be done during the day. You know that if you don’t do something with that idea and commit it to your system, you are going to completely forget about it. So this would be a good time to say “Hey Siri - Set a reminder for 11 o’clock today to do (whatever it is that you need to do)”. Siri dictation is pretty cool. You can also ask Siri to tell you what appointments and events are happening during the day you’ve already set into your calendar. Having this little chat in the morning with your friendly computer is a great way to start the day.

Checking up on the socials - What are all those people up to on the Twitters?

To be able to get through this far in the process of waking up in the morning in a good and geeky way your eyes will have to have been opened. So you might do the socials before you open up the emails so that you can be more awake when you have to start sending messages out to the wide world. Who knows what garbled rubbish you might start spouting if you haven’t given yourself some time to wake up properly. At least when you are checking out what’s going on with the Facebook and with the Google+ you are going to doing a little bit more consuming than creating. Still no need to do any typing, as you can use Siri to do the dictation and you might only have to correct one word or two. It is still a good idea to give it a check before you send it!

And so the day goes on

Once you start doing other things such as having your breakfast and walking the dog you can move on to things like listening to podcasts. I use the application Overcast which is fairly simple in the way that it functions, but it looks good and does all I need it to do. You can change the speed of playback so that you can listen to your podcasts quicker. You can also speed it up by telling Overcast to cut out any of the empty spaces. So each time there is a little bit of silence the podcast will jump past that. With some podcasts this is a particular good idea due to the way that the podcaster talks and also perhaps due to a lack of editing of the audio before it was published.

How do you start your day? Do you talk to your computer to get it to do your bidding?